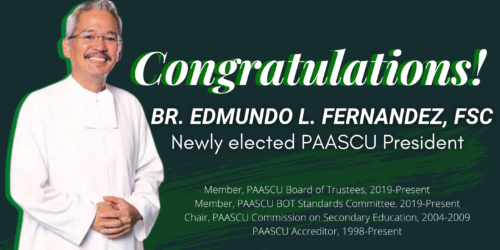 PAASCU would like to congratulate Br. Edmundo “Dodo” L. Fernandez, FSC, for being elected as PAASCU President during the May 28, 2021 Board of Trustees Meeting. Br. Dodo became an accreditor in 1998 and served as Chairperson for the PAASCU Commission on Secondary Education from 2004 to 2009.
He is the current president of De La Salle-College of Saint Benilde and La Salle Greenhills. He also worked as an administrator and served on various school boards both in the Philippines and abroad.